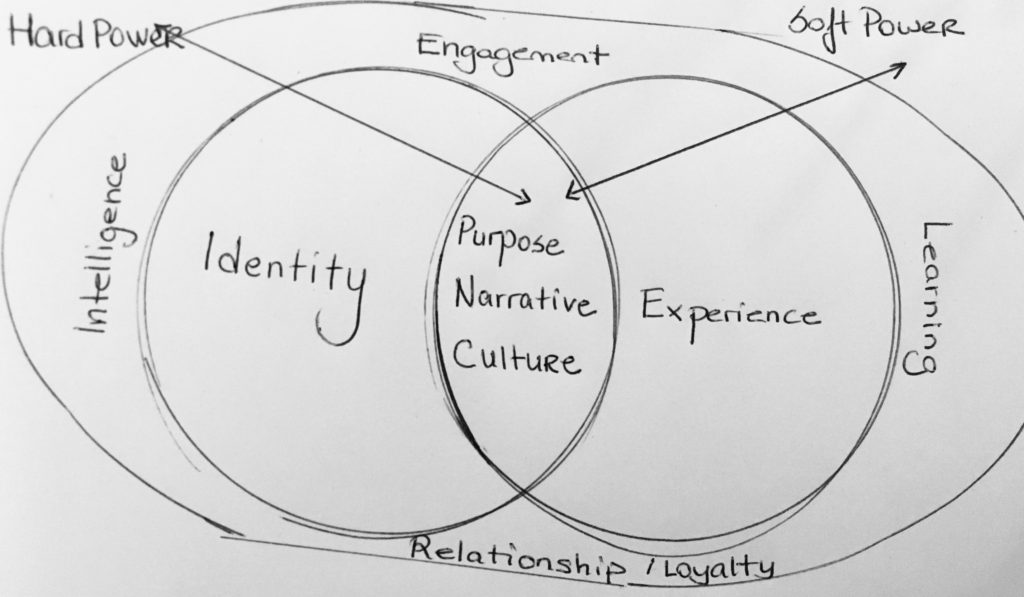 How credible are you?

Governments have it, cities have it,
Even educated people have it,
Let’s have it, let’s have power.

What’s the connection between the simple chart on the cover and the Cole Porter song you ask?

Well, let’s start with “What is Power?”

The ability to alter the behavior of others to get what you want. There are basically three ways to do that: coercion (sticks), payments (carrots), and attraction (soft power).” writes Joseph S. Nye Jr. a professor at Harvard University and author of Soft Power.

As brand marketers, we are mostly concerned with Soft Power. In fact, it is precisely what we are hired to inseminate, engineer and give birth to once a client brings an idea/ product/ service to the table.

British historian Niall Ferguson described soft power as non-traditional forces such as cultural and commercial goodsand then promptly dismissed it on the grounds that its, well, soft. Of course, the fact that a foreigner drinks Coca-Cola or wears a Michael Jordan T-shirt does not in itself mean that America has power over him. This view confuses resources with behavior. Whether power resources produce a favorable outcome depends upon the context.

A brand’s soft power come from three resources: its culture (in places where it is attractive to people), its values (when it lives up to them in physical, digital and experiential worlds), and its ongoing behavior (when they are seen as having influence and authority). Consider Lululemon.

Lululemon is all about living an active life. Their motto is “sweat every day”, and they encourage healthy activities like breathing deeply, drinking plenty of water and being outdoors. Their values advocate wellbeing and a positive image, something that people can relate to and aspire towards. Lululemon customers are given tote bags that have the company’s manifesto on them.

The feel-good quotes help elevate people’s mood and empower them throughout the day. By associating the brand with healthy values, Lululemon clothing makes people feel at their best self.

So, if soft power is the ability to shape the preferences of people through appeal and attraction, and its currency is changing and influencing their opinion through your culture, values, and behavior via a well orchestrated web of channels, influencers and networks, Lululemon does “Soft Power” quiet well.

Brands need to be mindful that no matter how good your product or your service (hard power) may be,  as Joseph Nye said “the best propaganda is not propaganda and credibility is the scarcest resource.”

Back to the original question and the chart on the cover, next time you are thinking about launching a new initiative, ask yourself how much time and resources does your organization allocate to each one of your powers.

And most importantly, how credible is your brand?