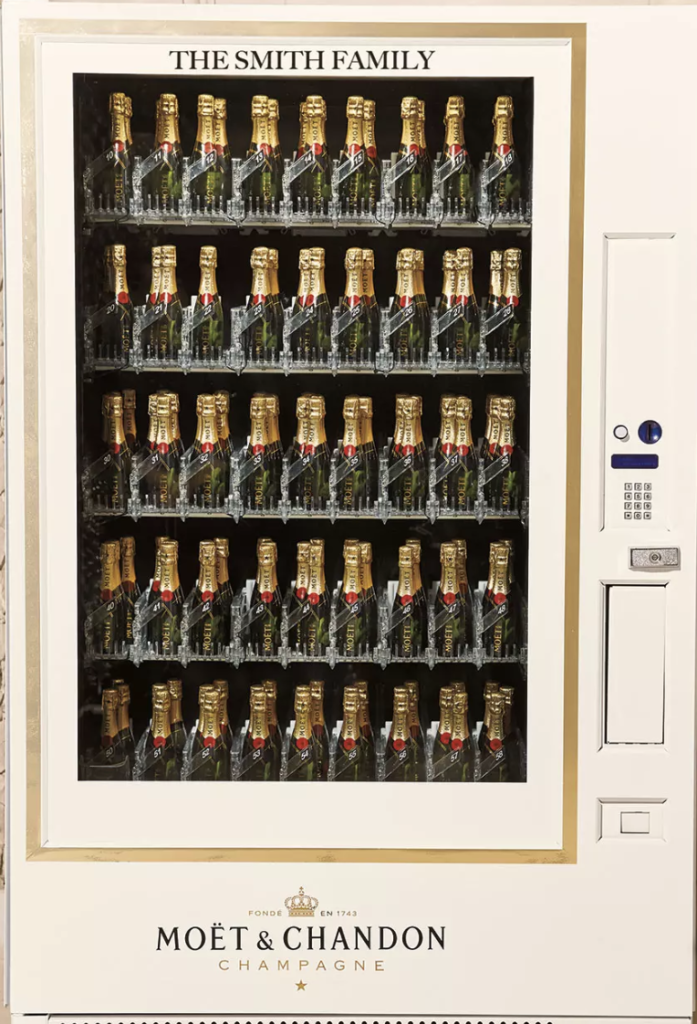 Moët On The Go

Some marketing ideas are superior to others. The latest two of my favorites are the Toblerone ice cream and the Moët & Chandon vending machine.

I was at the Naples Ritz-Carlton when I noticed this ingenious amenity. The vending machines are stocked exclusively with Moët & Chandon Champagne – two types in 200 mL bottles Imperial Brut and Imperial Rosé — and are dispensed with a complimentary flute.

The vending machine requires a $25 gold coin — emblazoned with the Moët & Chandon logo — to dispense the drink of choice. Guests visit the front desk for a coin, where they are required to show identification, but the perk comes at a premium.

The Naples location is the second Ritz-Carlton to unveil the luxury service: The Ritz-Carlton in New Orleans debuted a machine last year. The machines are permanently installed at several other hotel locations, including the Sagamore Pendry Baltimore and The Mandarin Oriental Hotel — now called the Waldorf Astoria — in Las Vegas.

High-profile events have also featured the vending machines — which hold 320 bottles — as a luxury rental, such as the Golden Globes. Just this month, Business Insider’s Hillary Hoffower observed a Moët & Chandon vending machine at the glamorous Shops at Hudson Yards opening.

Though the machines are fairly new to the United States, they first appeared at a Selfridge’s Christmas display in 2013, with special bottles adorned with Swarovski crystals. Since then, they have slowly appeared elsewhere, including celebrity posts on social media. In addition to hotels, the vending machines have appeared temporarily at bars, including Arnaud’s French 75 in New Orleans, Mama Lion in Los Angeles, and All Bar One in London.

Champagne vending machines are just one of the many ways high-end hotels are reinventing how their guests are served drinks.